The “Selfie” is not new. Since Robert Cornelius created a daguerreotype self portrait in 1839[1] humans have enjoyed this extension of self through the indifferent gaze of technology. The burgeoning of new media in the early 21st century with social platforms such as My Space and Facebook, as well as the continuing popularity of chat rooms, saw a new form of online personal portraiture. Often, the primary purpose of this new agency of performance was to make oneself look desirable and attractive to friends and potential sexual partners. These images were generally of poor quality, often taken in a bathroom mirror, sometimes in sexually suggestive poses and commonly reflecting the male gaze of society.

Proponents of feminist theory were quick to condemn these images as “a cry for help” (Andreasson, 2014) by young women lost in a ubiquitous sea of online identity crafting. Other feminists countered that it was empowering women with “tiny bursts of pride” (Simmons, 2013) and facilitating them with a new tool of expression. In fact much debate has raged over the internet and in above-the-line media in the last twelve months about whether such images are narcissistic or empowering, reinforcements of the male gaze or liberating for women, good or bad. Ultimately, both sides of this debate have much to commend them. On Facebook, the Selfies Research Network group, founded by Theresa Sneft, a teacher at NYU, has 1,162 members as at 29th June 2014, and is aimed at academics looking for a forum to discuss the Selfie phenomenon; it has strong feminist perspective. Performativity of gender has dominated discussion of the Selfie to date.

However, something bigger is happening and it is happening organically, virally and in the global subconsciousness of the 3 billion people (Internet Live Stats, 2014) connected to the worldwide web, and it is happening right now. When Apple released the iPhone 4 in June 2010 with a front facing camera, did this represent technology bending to global pressure? Or, was this technological determinism at play, directing our performativity like a master puppeteer?

A movement gains strength and momentum when it has a label or a name to rally around; that was given to us by a drunken university student in Australia on 13th September 2002. The Oxford Dictionary cites the earliest known use of the word in this text message, “Um, drunk at a mates 21st, I tripped ofer [sic] and landed lip first (with front teeth coming a very close second) on a set of steps. I had a hole about 1cm long right through my bottom lip. And sorry about the focus, it was a Selfie.” (Oxford Dictionaries, 2013). The accompanying image was a far cry from the hotly debated and stereotypical images of torsos, cleavage and seductive expressions. Perhaps this is why the word has stood the test of time (a veritable eon in the online world) and been taken up by a wider demographic as it carries broader implications than a simplistic myopia of physicality.

The article from Oxford Dictionaries on 19th November 2013, also proclaimed a 17,000% increase in use of the word over the previous twelve months, thus making it a clear winner for the Oxford Dictionaries Word of the Year. The colloquial label for this visual self-narrative was made official and, through the power of symbol sometimes attributed to the most powerful words of rhetoric, we have tabled a new topic for discourse.

We have moved far beyond the narrow scope of performativity originally ascribed to what we, now term, the Selfie. The original exploration of performativity of this social trend was primarily in gender studies; as well as analysis of narcissism with implications of self worth; thus we must establish our nomenclature of performativity. Judith Butler has produced the bulk of seminal work on the subject.

“…[this] concept emphasizes the extent to which performance realizes, or makes real, identities and experiences. […]actions and identities are real only to the extent that they are performed…[…] This implies that performativity is not the mere representation of preexisting identity (or other reality); performativity means that it is in performance that we enact, or generate, the very phenomenon to which performativity refers.” (Butler, 1990; Diamond, 1996: cited in Wood 2004)

To understand the broader implications of performativity in the context of the Selfie we must look at the expanded parameters and elements of this unique visual narrative in play today. Selfies consist of layers of signs and signifiers that communicate in a moment what may take many, many pages of text. The levels of meaning that comprise a Selfie can be categorized as:

Who, then, is performing right now? Obviously the Kardashians and Beyoncé’s of the world took to the art of the Selfie as if it were their new religion; but, what is infinitely more interesting is the many other people on the world stage who have indulged in this performance agency of self in the last twelve months.

The first ever Papal Selfie was sent live in August 2013 and since then this new, more accessible Pope has appeared in a number of Selfies on his Instagram account. “Since the Pope was selected in March, he has made clear his intention to connect with young people, and to move the Papacy into a more modern, informal age,” observed the U.K. newspaper The Telegraph (Alexander, 2013) It would seem clear that the Pope is not seeking to make any statement about his gender or sexual preferences, he is trying to attract more ‘followers’ to his Instagram account …or church. He is image crafting via the most current and accessible magic bullet to bring youth into his flock

World political leaders were quick to grasp on this new, liberating Selfie, freed from the sordid connotations of an online dating profile picture. We have seen Selfies from the heads of state of: France, Singapore, Belgium, Israel, Russia and many other countries. The one that topped the charts in this category was that of Obama and the Prime Ministers of the U.K. and Denmark, a little trinity of power sharing a Selfie moment of merriment…at Nelson Mandela’s funeral. Michelle Obama was just the first to express her displeasure at such childish joviality at the memorial service of one of the world’s greatest leaders for human rights.

So what was their intent of performativity? It would appear they didn’t pause to consider, being swept away in the Selfie moment. Evidence that discourse on the communicated intention of the Selfie is a vitally needed lesson for even the most powerful world leaders. A Tumblr page produced by Jason Feifer to explore the phenomenon of Selfies at funerals was closed when Feifer announced victory in the Guardian, “Obama has taken a selfie at a funeral. Our work here is done” (Feifer, 2013). This is a firm example of the performativity gaining more palpability than the reality of the subject. The subjects making themselves into the object of the performance.

In the last few months we have seen Selfies of tragedy and disaster. In January 2013, Ferdinand Puente’s crashed his plane into the ocean and took a Selfie whilst waiting for rescue. Note in the image the plane in the top right sinking into the ocean. Also note Puentes’ expression.

A journalist for Jezebel ponders, “One the one hand, one could argue that in the midst of a tragedy (or potential tragedy), turning the camera on oneself is blithely narcissistic and inherently myopic; instead of documenting the actual situation, it documents one’s face in front of the actual situation (or the aftermath)” (Stewart, 2014). Can we escape the hurricane-generated whirlpool of technology as McLuhan suggests in Understanding Media, or are we doomed to stay trapped in our self-created extensions of man? At this dark base of the Selfie we find individual narratives of lost souls such as Danny Bowman, a young man suffering body dysmorphic disorder who became suicidal after being unable to perform the ‘perfect selfie’ (Robinson, 2014).

Another interesting project is Selfiecity, a project created by academics and social theorists to provide raw data to the community for discussion. They have compared 3,200 Selfies (selected from 656,000 Instagram images) from five cities and contrast such things as smiling, head tilt, age, gender and mood (DigitalThoughtFacility, 2014). This is an excellent resource for academics to draw data from, remembering that the data is somewhat self-selective. The fact that Selfie platform Snapchat turned down a FaceBook buy out of $3 billion in November 2013, with Facebook then spending $16 billion on a competitor platform WhatsApp (Durden, 2014) verifies the economic reality of this addiction of performativity by Selfie.

Clearly the Selfie is now a far more complex method of communication with performativity implications beyond the blurry, bathroom ‘self-portraits’ of yesteryear. It has out grown the bounds of gender performativity (although this remains an important subset of study) and has become a lens into the performativity of the human race. In 2014 the very act of creating and performing a “Selfie” carries with it an agency greater than the constituent elements. It is an attempt to join in on the global game of Selfie, to lift one’s voice above the ubiquitous roar of humanity’s substance, transubstantiated into pixels of light. In a world of information overload when even 144 Twitter characters has become too onerous to digest, the Selfie is capable of screaming a trove of information almost instantaneously.

On the Christmas Eve of 2013 Mike Hopkins brought us a truly unique visual self-narrative attempting to include all of us in it. His Selfie,[1] taken outside the international space station and uploaded to twitter from far above the Earth gives us fodder for a completely new dialogue on the global Selfie 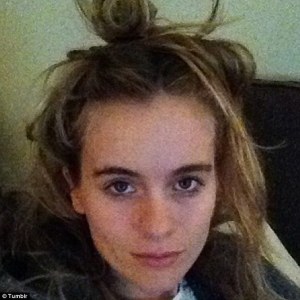 The Selfie proved that it could go far beyond the narrow confines of individual and narcissistic parameters when the #NoMakeupSelfie Campaign was launched to raise money for breast cancer research. Prince Harry’s girlfriend, Cressida Bonas, jumped onto this cause which raised $3 million in two days. A powerful performance from women around the globe.

The famous Ellen DeGeneres #BestSelfieEver, made at the Oscars, was re-tweeted two million times in one hour, crashing Twitter in the process. Was the impetus simply to outstrip Meryl Streep or was it a plug for Samsung (note the Samsung device in the center of the image)? Samsung denies it was behind this stunt… but it does show an immensely powerful new marketing platform

The Dalai Lama visually iterates the need for compassion in this Selfie with polio survivor, Ramesh Ferris. Ramesh has been hand cycling across Canada to raise awareness. In this image note the relationship between subjects.

NASA brought us the uplifting #GlobalSelfie Campaign for Earth Day, 22nd April 2014; a 3.2 gigapixel compilation of 36,422 Selfies of people from over 100 countries, making a Selfie Global Village.